Thanks to the great collaboration with Zhejiang University and China Jiliang University teams, we have recently reported in ACS Energy Letters on the performance of cesium copper iodide-based EL devicces. Here, we reveal that it is the in situ formed copper iodide complex, generated during the deposition of the electron transporting layer on cesium copper iodide films, that dominates the electroluminescence. It is also found that the narrow bandgap and widely distributed band-edge states of the complex facilitate the hole injection, resulting in low-voltage driving. Combining a modified hole injection layer to suppress the interfacial exciton quenching, an efficient broadband LED with a turn-on voltage of 2.3 V and a peak EQE of 4.6% was achieved. The driving voltages at 100 and 1000 cd m–2 are 2.9 and 4.9 V, respectively, both of which are the lowest among all reported Cu(I) complex-based broadband WLEDs. 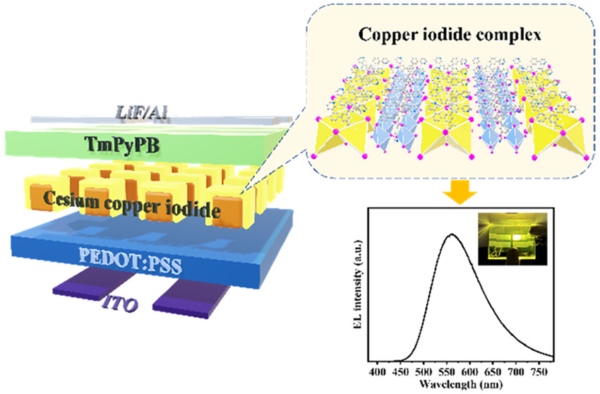 OPERA Solutions is an innovation hub for soft electronics. By undertaking contract researches for industries, we help customers accelerate their product development and hence accelerate the launch of cutting-edge applications in the market.

We use cookies to ensure that we give you the best experience on our website. If you continue to use this site we will assume that you are happy with it. Privacy policyOKPrivacy policy